This action allows you to edit the value of a control

The Update Controls on Screen action allows you to change the value of a control (objects and fields) on the screen.

For example, this can be used to update the display text on a text object, or an option in a dropdown.

This action requires the following parameters to be filled:

▶ Control to Update: the control on screen to change. This includes objects and fields.

▶ Update control using this value: the value can be typed in manually or pulled from the session, action results, or other controls.

▶ Add another control: you can update multiple controls at a time in this action.

In this scenario, we are going to reverse engineer the Activity screen to showcase how the Update Controls on Screen action works.

If you open up an existing activity, you will see a screen similar to this:

In this example, we are only concerned with the header text which displays "Activity:453". In design mode, the Activity:453 is displayed using a text object called "Activity" as shown below. 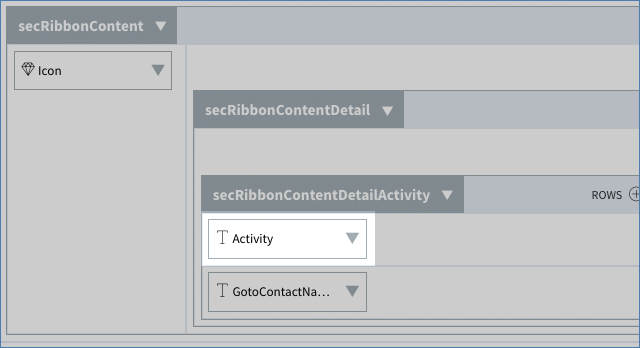 This field is updated in the screen's Active Record Change event (more information on this event in our article List of Events).

When you select that event, there are a lot of actions, but we'll focus on two of them:

When you select the Update Controls on Screen action (action #8 in the list), you will see how it is configured.

As you can see, all this action is doing is taking the action result resultActivityHeader and updating the text in the text object Activity.